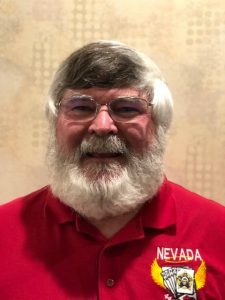 Tony “Trip” McCleery was born in 1956 in Souix City, Iowa to a United States Marine and his young bride. At the age of 17, he made the first of many service commitments by joining the United States Marine Corps. In 1980, he again chose to serve his country and joined the United States Air Force. During his time in the Air Force, McCleery served with the following: 35th Tactical Fighter Wing, George AFB; 6151 Consolidated Aircraft Maintenance Squadron, Suwon AB Korea; 2951st Combat Logistics Support Squadron, McClellan AFB; and 4450th Tactical Group/37th Tactical Fighter Wing, Tonapah Test Site. When the F117A Stealth Fighters were still considered top secret, he was deployed to Saudi Arabia during Operation Desert Shield/Desert Storm and made a deep impression upon the Prince of Saudi with his colorful sentiments.

Throughout his military career, Tony volunteered his time for many community and disaster relief programs. McCleerly continues to donate time by rescuing flood victims, recovering human remains from plane wreckages and counseling rape victims of all ages, male and female. He was ‘the first’ male counselor with the Rape Crisis Center of Sacramento, California team and his volunteer work with Rape Crisis would continue when he was relocated to the Nevada desert. It was during this time that he met numerous Las Vegas Metro General Assignment Detectives and became a regular ride along with the unit. After three years working side by side with GA Detectives, they convinced him to test for Metro.

In 1993, after 17 years of serving his country, Tony proudly joined the Las Vegas Metropolitan Police Department to serve his community. He spent two years on bicycles in the Downtown Area Command and a short stint in the Detective Bureau. He then went to the Traffic Bureau, where he spent the majority of his career on graveyard shifts getting paid to ride a motorcycle. He was hit by a drunk driver in 2011 and suffered substantial injuries. In 2012, after almost 37 years of serving in a uniformed capacity, Tony reluctantly retired due to related injuries.

Tony has a long record of service and takes great pride in continuing that legacy. He currently holds the Treasurer position for the Fraternal Order of Police (FOP) Las Vegas Lodge #1, where he supports and serves police officers. His passion to help in disastrous situations is still very apparent, as he is currently making progress developing the Lodge’s Disaster Relief Trailer.

God bless the Thin Blue Line, the peacekeepers of the world.