They provide an arena where kids feel safe to discuss their problems (i.e. toe tags). Kids talking to kids peer-to-peer, without the pressure.  It gives a voice to kids who may not have one otherwise.

Based on real-life stories, retired Vegas cop R. Byron Stringer “brings the streets to the stage.”  Him, his staff, and his troop of talented young actors have traveled locally and across cities in the US in an effort to deliver their message.  To say the least, the messages in the monologues are unique, powerful, personal, and emotional.  We must continue to make these voices heard.  The Life Skills Workshops, Job Skills Workshops, Mentoring Programs and live performances this organization offers is saving kids’ lives, one at a time!  The Toe Tag Monologues is the most prolific intervention program in America today! 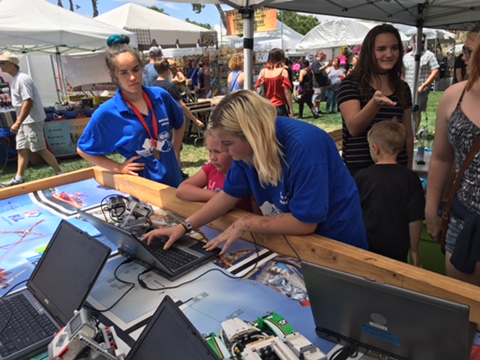 Las Vegas Lodge 1 is also actively supporting the Boulder City 4-H Club.  The 4-H team consists of kids between the ages of 6-18.  Boulder City 4-H youth have participated and won many trophies and awards this past year.

One of our very young robotics teams, Boulder City Super Bots, Jr. FLL, received an award for their motorized Lego model on how to transport food and water from the earth to the moon.

Youth from the club’s First Lego League team won the 1st Place Project trophy for research project in the Southern Nevada First Lego League Qualifier. They made a proposal for using snake plants to create oxygen for the astronauts on the Space Station. They created a prototype with a solar powered bio-oxygen converter.

The Boulder City 4-H Club competed well at the last Clark County Fair in Logandale, Nevada. They won 3rd Place for the Clark County Steer Showmanship and we’re able to auction off their animals.  They also won numerous other animal contest awards at the county fair.

The 4-H youth also volunteered at the Miracle Flight Carnival. Miracle Flight is a non-profit that transports children and their families to children’s hospitals for major medical treatments or surgeries.